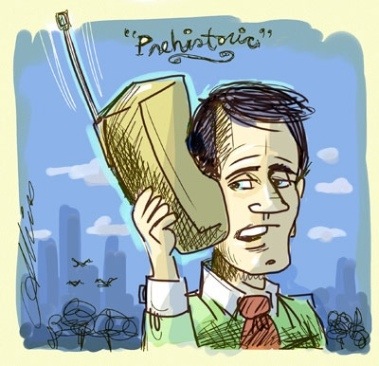 Is that a little man or a big phone? Illustration Friday this Friday -- or should that be last Friday? -- I'm still catching up -- theme is "Prehistoric." Maybe it's the fact that I just got a new mobile phone and am still learning the shortcuts to all the things I could do with my old phone before, much faster,
but the first thing to come to mind was a guy with the old, eighties style less-than-exactly-mobile-mobile phone. Won't be long before there'll be inner ear implants at this rate. "Hello? I'm sorry, no it's not the network, it's my inner ear congestion and post nasal drip that are effecting the call, try calling my other ear, I just took a decongestant. Funny, I just realized this kind of looks like my dad back in the day. I think he even had one of these chunky phones in his car, back when they were still called "car phones." To his credit, he would never be seen using something like that outside the car. I suppose if he ever broke down, he could use the phone as a "chock block" to keep his car from rolling down a hill.

Posted by Charles Akins at 8:30 AM No comments: 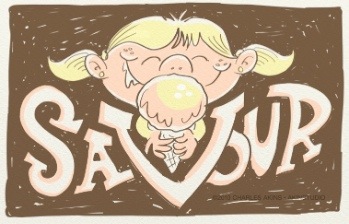 "Savour," this week's Illustration Friday theme, made me think of a kid savoring an ice cream cone. Somehow,
it was a rough sketch of a boy, then a girl, then I noticed the shape of the cone could form a "V," so, I added type to what eventually became a little logo or label. Although, this is still a "rough," I would love to take it to a tighter, finished form. I think it could make a great ice cream flavor or brand. "Savour the Flavour!" Yum!, creative freedom!

Posted by Charles Akins at 1:14 PM No comments:

Some of My Animations